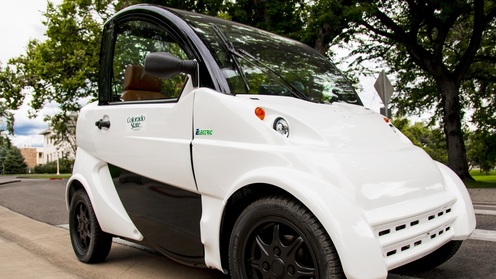 One of CSU's electric cars. Photo taken by Kyle Dueschle.
​What it lacks in seating space, it makes up for in a punch of sustainable energy power. As yet another transportation alternative to be offered, faculty and staff can look forward to a new electricity powered automobile, or UEV, offered by the Academic Computing and Networking Services (ACNS).

Four little, multicolored UEVs were given to Colorado State University as part of a research experiment imagined by a university founded organization called Internet2. After a proposal by a team of faculty and staff was submitted to Internet2, CSU was one of four chosen campuses for the project.

Scott Baily, director of academic computing, networking services and telecommunications, was one of the team members who helped bring the cars here.
​
“We are interested in seeing if having electric vehicles available to faculty and staff might change their willingness to adopt various forms of alternative transportation,” Baily said.

Though still in the beginning stages of the project, Baily hopes that the cars will be available through the Motor Pool, where faculty and staff would be able to call to reserve a car and drive it for a certain period of time, all available at “no charge.” Worried about paying to fuel it? Well, the cars can be powered up at one of the charging station around campus - also for free, according to Baily.

Baily believes this option has potential for faculty and staff, whose concerns he is aware of, such as being barred from running errands or picking up young children without their car.

“But,” he said. “If we could address those needs and concerns in some fashion then maybe we could help to further our progress in the adoption of alternative transportation.”

Baily lists several reasons why he believes the UEVs will prove successful, like limiting the number of non-electric car drivers on campus, collecting some useful data for the university and, of course, to keep CSU a sustainable campus as well.

“But if I had to pick one thing I like the best, it would be watching peoples' faces light up when they get behind the wheel of these little cars for the first time,” Baily said.

The UEVs, manufactured by a project partner named Innova and paid for by a grant that they and Internet2 earned together, are expected to be available for faculty and staff to check out sometime this semester.